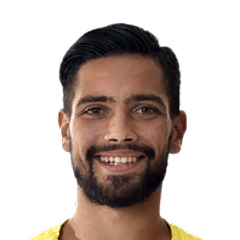 As shown above, Jorge Samuel Fernandes has the following key attributes on FIFA 20: